“I was more of a quiet folk in high school. I was involved in a couple things like music, but the idea of having any leadership role was kind of far-fetched to me when I first came to Newman. I think I really found myself here.”

Meet junior Claire Setter — a biology pre-med major with a quirky fashion sense, a sense of humor and a love for piano and improv. But these are just a few of her many interests.

“She is one of a few people I have met in my life who truly has the potential to embark on any career path ranging from the arts to the sciences,” he said. “She will make for a very fine physician someday but she just as easily could become a musician, comedian, actress, social media sensation — you name it.”

Setter, who hails from Topeka, KS., said it was the science program that first drew her to Newman, but the factors that have kept her at the university involve much more. A few of her favorite aspects about Newman, she said, include the classes, the people and the overall environment.

“I think I’m doing much better because of the class sizes here than I would have had I gone to a bigger university,” Setter said. “I’ve met a lot of wonderful people through various activities and just getting to know my professors a little better as well.”

One of Setter’s favorite professors is Leveritt, whom she has gotten to know better thanks to her position as a physics lab teacher’s assistant, she said.

“Claire has been an exceptional student and T.A.,” Leveritt said. “She is super fun to have around and does invaluable work setting up and testing out labs before the physics students attempt them. Although she is on the quiet side during class, she absorbs complicated concepts and is able to master ‘spooky’ physics with relative ease.”

During her college experience, Setter has been involved as a student ambassador, a physics tutor and a member of the Campus Activities Board (CAB). This year, Setter was selected to be the chair of CAB, working alongside Graduate Assistant of First Year Experience Jordan Frederking. 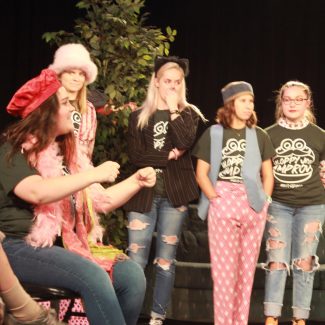 Claire, 2nd from the left, performs with the Sloppy Joe Improve Group.

In addition, Setter is a member of the Newman band and instrumental ensemble, in which she plays the piano. She said, “It’s how I get my musical outlet out there and it kind of forces me to practice, too, because sometimes it’s hard to find the time.”

Setter has also spent the last year and a half as a member of the Sloppy Joe Improv Troupe.

“Being on the Sloppy Joes has been the most fun thing ever and I’m so glad people forced me to audition,” Setter said with a laugh. “I didn’t realize how much I would really love it.”

Students, faculty and staff who attended the Newman’s Got Talent event as part of Homecoming Week may recognize Setter from her popular alter-ego, “Carrie T.” Setter was dressed in “hip” gear from head to toe — complete with french braided pigtails, big glasses and a Starbucks cup in hand.

“It was fun, I got to dress up in a quirky little outfit and just be weird. I don’t know if people found it funny, but it was fun for me and that’s really what matters,” she said with a laugh.

“Claire is the funniest person I’ve ever met,” Junior Xime Name, Setter’s good friend and roommate, said. “Every time I’m with her I know I’m going to have fun.”

For Name’s birthday in January, Setter surprised her with a “Happy Birthday” video on Facebook. Not only did it include messages from Name’s Newman friends, but also from friends and family back home in Mexico.

“Claire gave me my birthday present and then said she had something else for me later on,” Name said. “A few hours later, she gave me her phone and played the video, and at first I thought my mom made it and sent it to her. But at the end of the video Claire told me she made it and I was like, ‘What? You took the time to talk to all of these people? All these relatives and friends?’ 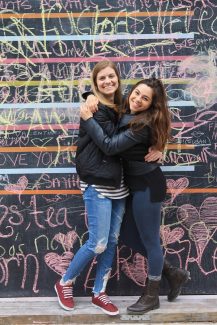 Claire Setter and Xime Name pause for a photo near the Pop-up Urban Park in downtown Wichita.

“That was probably the best birthday gift I got, and I didn’t expect it at all,” Name said. “It made me cry.”

“At first, I used to think Claire was really shy and introverted, and then once I got to know her she turned out to be the complete opposite. She’s so funny and nice and outgoing. So for people who don’t know her yet, she’s really fun,” Name said with a smile.

Setter describes her style as “a little on the hip side, but also a little quirky.” Her go-to outfit consists of a cool shirt, skinny jeans and her pair of Converse or Adidas shoes, depending on how she is feeling, she said.

“I do have my sock collection and that kind of adds a little randomness to the bunch,” Setter said. Her favorite pair depicts a scene where cows are being abducted by aliens. Her llama socks are a close second, she said.

In her free time, Setter loves learning new piano music, watching “Grey’s Anatomy” and “Black Mirror” on Netflix and hanging out with friends. Even if “hanging out” consists of driving to McDonald’s at midnight, getting some fries and talking, these moments are always some of her favorite times, she said. 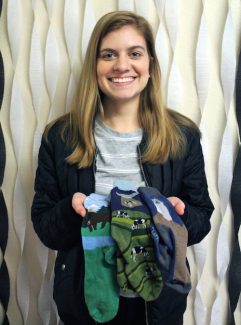 Claire shows off three pairs of her favorite socks.

Setter occasionally takes on piano gigs on campus and plays for events like High Tea and the Cardinal Newman Dinner. She is well-known off campus for her performative abilities as well — particularly for her music video parody of the popular song, “New Rules” by artist Dua Lipa.

After getting hooked on the song for its catchy tune, Setter watched the video a few times and then it hit her — “I could totally make this,” she thought.

She started choreographing a dance to the song in her living room, then texted a friend from high school to ask if she would be willing to film it. Later that week, the two met up, spent five hours filming and editing and uploaded it to YouTube.

“I was only expecting to get like a couple hundred views from family friends and a couple others, but it definitely exceeded my expectations,” Setter said. The grand total amount exceeded 64,000 views.

The original version of the music video stars the female lead singer with a group of girls, while Setter’s version stars her by herself and her pet cats.

“It was really a parody but people didn’t really understand that, so I got a lot of hate comments,” she said. “They were saying things like, ‘Wow, you’re alone, you have no friends.’ I guess they just didn’t get my sense of humor. Either way, it was a lot of fun to make.”

Unfortunately, due to copyright laws, the video is no longer available on YouTube. 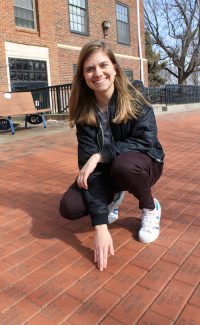 Claire stops near the brick dedicated in her grandmother’s honor, just outside of Sacred Heart Hall.

During her freshman year, Setter said she was walking on the brick area just south of Sacred Heart Hall when she noticed that the bricks were labeled with names of individuals and graduation years. She remembered that her grandma graduated in 1954 and, out of curiosity, started searching for the name “Carol Drouhard.” Sure enough, Setter found a brick labeled in honor of her grandmother.

“My Nana came to watch one of the band concerts, and I told her about how I found the brick with her name on it,” Setter said. “I showed her it and she was like, ‘I had no idea!’” 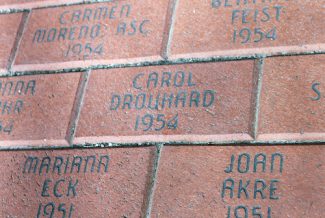 For those looking to get the most out of their college experience, Setter has a few words of advice.

“Try new things that you wouldn’t think you’d like,” she said. “With improv, I didn’t know if I would like being up in front of a crowd, being weird — but it’s actually the best thing. And I didn’t realize being a tutor or a T.A. would be so much fun as well.

“For me, I think the best thing was just getting out there and getting involved. I know that incoming students will hear that so many times because I know I did, but it’s really true. So much can come from expanding your horizons.”

Setter is currently studying for the Medical College Admission Test (MCAT) in the hopes of getting into a medical school after graduation. 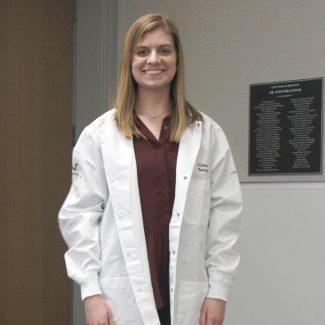 Claire is honored at the 2018 Lab Coat Ceremony for her accomplishments thus far in the science program.

“That is my ultimate dream — to become a doctor and to be able to help those in need who can’t help themselves through my knowledge and other things that I gain.”

Setter said she is thankful for the Newman Medical Professionals Club, an organization that offers insights from student representatives with experiences that are meant to aid students hoping to enter the medical field. These students discuss the application process, what to expect at interviews and more.

“That is really helpful because before, I had no idea what it would be like or how intense it would be, and that kind of woke me up in a way,” Setter said. “I now realize exactly what needs to get done, what I need to focus on and what I shouldn’t focus on in order to get there.”

Leveritt said, “Claire has a rare blend of analytic and creative ability that has granted her the potential to accomplish anything.

“I am extremely confident that Claire will be an excellent physician,” he added. “My hope though is that she maintains an avenue for that creative spunk regardless of the demands of her career path.” 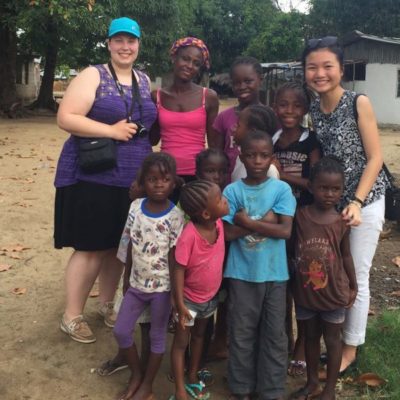 Pilgrimage to Liberia commemorates the Five Martyrs of Charity